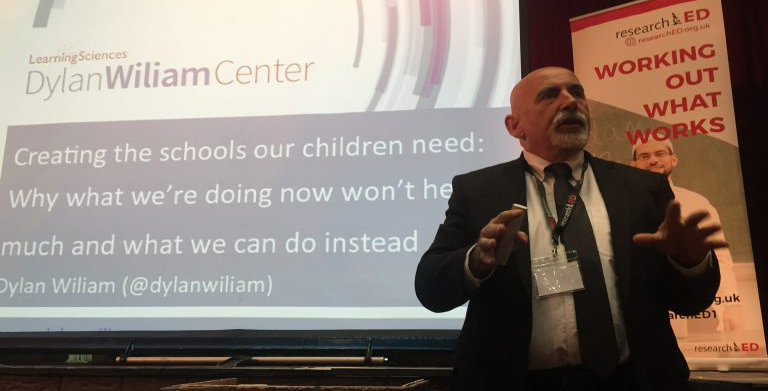 On Saturday morning in North Philadelphia, a confident British man named Dylan Wiliam stood before about 100 teachers and told them that pretty much every education reform idea they’ve heard is bogus.

And it’s never going to get any better.

What about school choice?

A special kind of stupid.

There’s plenty of people who would disagree with each of these statements. But Wiliam, a well-known education researcher, was driving at something else — the idea that you can’t simply trust the next big education fad. You’ve got to ask if there’s evidence to back it up.

“That’s why I’m saying teachers, administrators and schools have to become critical consumers of research,” Wiliam told the educators gathered inside the auditorium at St. Joseph’s Preparatory School.

This is the nutshell logic of ResearchEd, a series of conferences held around the world where education researchers share their work with teachers. Saturday’s was the first held in Pennsylvania.

Unlike an academic conference — where intellectuals talk among each other — a ResearchEd conference brings researchers face to face with principals and teachers. The organizers think there’s value in that exchange — a way for teachers to learn what the latest studies say and for researchers to see how practitioners might digest their theories.

More broadly, though, the conferences — and the online community that has sprung up around them — seek to change the relationship between teachers and education research. Rather than telling teachers to accept dicta from on high, ResearchEd wants teachers to be fluent in the language of academia and understand what studies say about the things they do in their classrooms.

“When you see a study that looks really great, we want your B.S. detector to go on,” said Eric Kalenze, a researcher who helps organize ResearchEd conferences in the U.S. “We want you to question things like, what’s the “n” size?”

Founder Tom Bennett first thought of the idea that became ResearchEd five years ago when he was teaching in one of London’s poorest neighborhoods and moonlighting as a blogger. The self-described “insomniac with a guilty conscience” noticed a troubling pattern among his colleagues.

“Basically a lot of people relied on what I call ‘folk teaching,’” said Bennett. “They relied on their hunch or their instinct or their intuition.”

That reliance especially troubled Bennett because he was working in a low-income neighborhood, where he felt students needed teachers to bring the best out of them.

So if a district spends its precious dollars on iPads for every student, Bennett said, it better know the intervention is going to work. Too often, he worries, salesmen peddling bad science smooth-talk district leaders into buying bad products.

Kireema Sprowal, a teacher at Feltonville Intermediate School in North Philadelphia, admits it’s hard to focus on anything other than “intuition and survival” when you’re managing the many day-to-day duties of teaching.

But she does think some teachers are hungry to learn more, as long as they have somewhere to start their inquiry.

“I’m here on a rainy Saturday, not to toot my own horn,” Sprowal said with a laugh. “I see a lot of my other colleagues here, as well. It just takes a passion within yourself. It’s a choice.”