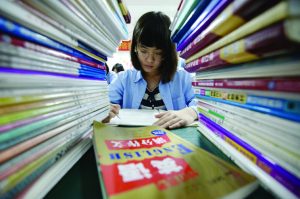 Testing impacts learners and schools in the U.S. differently than it impacts those in many other nations

In most of the developed world, high-stakes tests make or break a student’s future, sometimes before the age of 12. Many countries use national benchmarks to assess students, and construct tests to gauge understanding of the core curriculum.

This was an original goal of the Common Core, but in the U.S., standardized tests have become more about ranking schools and even teachers.

“In most other countries, everything the kids do leads up to testing at the end of the year in June,” says Dylan Wiliam, emeritus professor of educational assessment at University College London. “In many cases, those tests are used to determine a student’s future.”

U.S. students, of course, also take summative tests in the classroom that affect grade-point averages and, in turn, college eligibility. High-stakes SATs and ACTs also figure into the equation. But American standardized tests rarely determine which public school a child can attend. “In the U.S., it is high stakes for the teachers, not the students,” Wiliam says.

From middle school to college, most students elsewhere in the world face a do-or-die climate that offers one shot at getting into the academic programs and schools that lead to better, more fulfilling jobs, Wiliam says.

“In the U.S., it is high stakes for the teachers, not the students.”

In the U.K., students take the National Curriculum assessment before entering grammar school (which serves students ages 11 to 16). The results—a combination of testing and subjective teacher judgments—place students into “selective” or “super-selective” grammar schools.

The testing system in the Netherlands begins separating students at about age 12 with a test called the Cito Eindtoets Basisonderwijs. The scores steer students toward secondary schools that are either prevocational or that include both prevocational and secondary education.

But the test is not the only factor. Teacher and parent recommendations are also considered. Occasionally, an IQ test can accompany this assessment to identify children who do not test well or excel in school.

At the end of secondary school, Finnish students take a test that serves as both a high school graduation requirement and as a college entrance exam. Because school ends in mid-February and The Matriculation Examination takes place in late March, students have six weeks to prepare.

Wiliam says European testing tends to dig deeper into a student’s overall knowledge than does the U.S. approach. Students must analyze, write and explain their opinions—all important job skills.

“In England, students are asked to do a literary essay on a poem,” he says.

Getting into the best schools

Stress may be even higher in Asian countries. Students spend hours cramming for big placement tests and often pay handsomely for tutors.

Students who can’t afford extra classes or tutoring can be left behind—a criticism often leveled against SAT and ACT prep in the U.S.

Japan’s high-stakes high school entrance exam places students into secondary schools that are ranked as vocational, educational or new comprehensive (which combines both). This assignment often determines what type of college students will attend, as well as what type of job they will eventually hold, says Akihiko Takahashi, an associate professor of mathematics education at the College of Education at DePaul University in Chicago.

While high stakes, everyone has a chance to succeed regardless of their financial background because all students are taught the same information throughout the school year, Takahashi says. The test aligns closely to school curriculum and is designed to discourage cheating.

In China, students sit for a nine-hour test called the Gaokao at the end of 12th grade. This national exam covers six subjects. All students are tested on Chinese, mathematics and a foreign language. Students also select from a variety of additional subjects such as science, politics or history. It is required for entrance into almost all higher education programs.

The test results rank students, who then request admittance to the schools of their choice. This streamlines the placement of a high number of graduating seniors. In 2018, 12 million students took the test.

The Gaokao also determines what major a student can pursue. “If you go to the best school, you get a different life,” Chen says.

“There is no other way to get into a good school without scores. There is no transfer of schools, and it’s even difficult to change a major.”

Many in the Chinese education system believe the testing is fair because all the schools cost the same—a good college or university doesn’t cost more than a bad one, Chen says.

“If you are the child of migrant workers, you still have an opportunity to get into the best school,” Chen says.

Chen also points out that student outcomes prove the system’s viability. “If you look at the product that these countries turn out, those that do well on the test continue to perform well and go further,” he says.

On the other hand, the Chinese system is criticized for not being holistic and for implying that all questions have a standard answer. “People ask, ‘Where’s the creativity?’” Chen says. “If a student studies for a test for an entire year, it doesn’t encourage creative thought, problem-solving or individualism.”

Chinese families who oppose the high-stakes environment sometimes pull their students out of the education system. Those students attend an international school that prepares them for universities abroad, often in the U.S., Australia or the U.K.

Other countries have reached standardization that is difficult to achieve in the U.S. because states issue their own tests. This de-emphasizes alignment with the Common Core, says Depaul’s Takahashi.

“In Asian countries, the tests are very aligned to the standards,” Takahashi says. “In the U.S., it is not very well aligned. The curriculum should be aligned to the test. It should be coherent.”